“Dr Leonti Thompson, a psychiatrist at Napa State Hospital 15 miles north of Vallejo, has found a number of different meanings in the killer’s crossed-circle “signature.” In one primitive culture it represents the earth; in another, the ancient notion of the four elements that make up the world: earth, air, fire and water. Still, another symbol, the “X”, represented water in the alphabet of the legendary continent of “Mu”. ‘And the killings took place near water,’ Thompson notes speculatively.”

“I thought it was strange that the killings so far had taken place in locations that had a form of water in their name: Lake Herman Road, Blue Rock Springs, Lake Berryessa, and Washington Street, which was quite close to Lake Street.” Robert Graysmith,

Both Dr. Thompson and Graysmith underlined the strange peculiarity of the references to the water in the crime scenes of Zodiac. They are not just location near the water, but places that take their names from it.
That series of observations was named “the water theory“ in the movie “Zodiac” directed by David Fincher.
I wrote about it two years ago in my first article on the Monster-Zodiac connection on tempi.it. Since then, I have investigated it up to elaborate a list you find below.

Also the locations of the phone booths where Zodiac called the police had a reference to the “water”. Zodiac mentioned the water in one way or in another one in several of his many letters, too. His nickname itself was took from a watch brand, Zodiac, that praised the waterproof skill of the model Sea Wolf in its réclames, at the time of the killer’s misdeeds.

22. Le Fontantine di Rabatta, The Little Fountains of Rabatta , Sieve River (crime scene);
23. It has been recently found out (here’s the news) that also the Monster of Florence made a reference to the water in his only official letter mailed to the prosecutor Silvia Della Monica after the murders in September 1985.
On the envelope there was just one word cut out in its entirety, “DELLA”. It has been indispensable for the identification of the weekly, the number 51 of Gente from 1984. The Monster had taken it from the title of an article by Italian writer Piero Chiara:

«Dear sweet waters, I do not know you anymore: my childhood dream is ended here»

From that title, the murderer selected the only whole word of the letter, “DELLA”, and other two letters: E of acque (waters), and Z (of Zorro?). 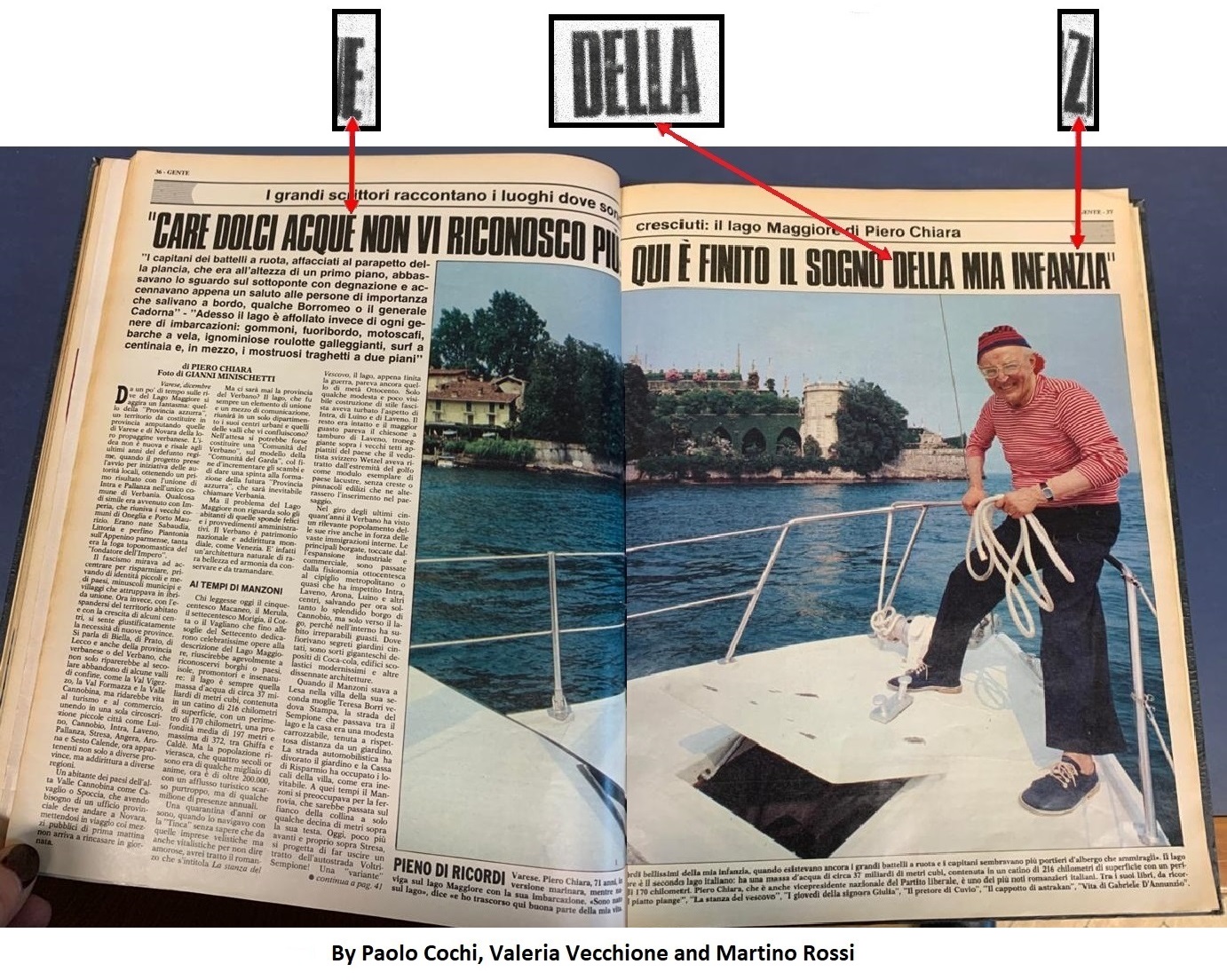 On the envelope of the Halloween card, Zodiac underlined the letters “LAV”. Why?

In the Collins Italian College Dictionary (1991), most of the words starting with LAV have a link with the Italian word for “to wash”, lavare.
It is a clue on the Italian ancestry of Zodiac.
In the context of the Halloween card, that underlining provide a confirmation of the solution (that is in Italian).